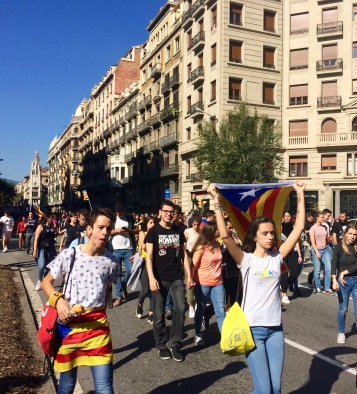 First of all, many people were marching in the activity of the Independent Declaration Movement in the Gothic district of Catalonia.

I confirmed its site on Thursday, October 26. There were a lot of young people participating. State police and town police were guarding with cars at the end of them. Two helicopters were flying over the city.

Recently, the interactions of the police and civil riots have been picked up in the news and the media even in the country where I live.

The news and media seem to report a part of the extreme interaction between the police and people in the city.

I feel the media is reporting a bit extreme. The whole city was lively and there were full of foreign tourists.

There was never any danger in the due to demonstration. In the demonstration march, young people frequently said the word “Catalonia, Libera.” and wrapped around the state flag on the back.

Luckily, there was no riot. Some participants were dancing and singing. It looked calm and unlike the image of the violence seen between police and citizens in the media.